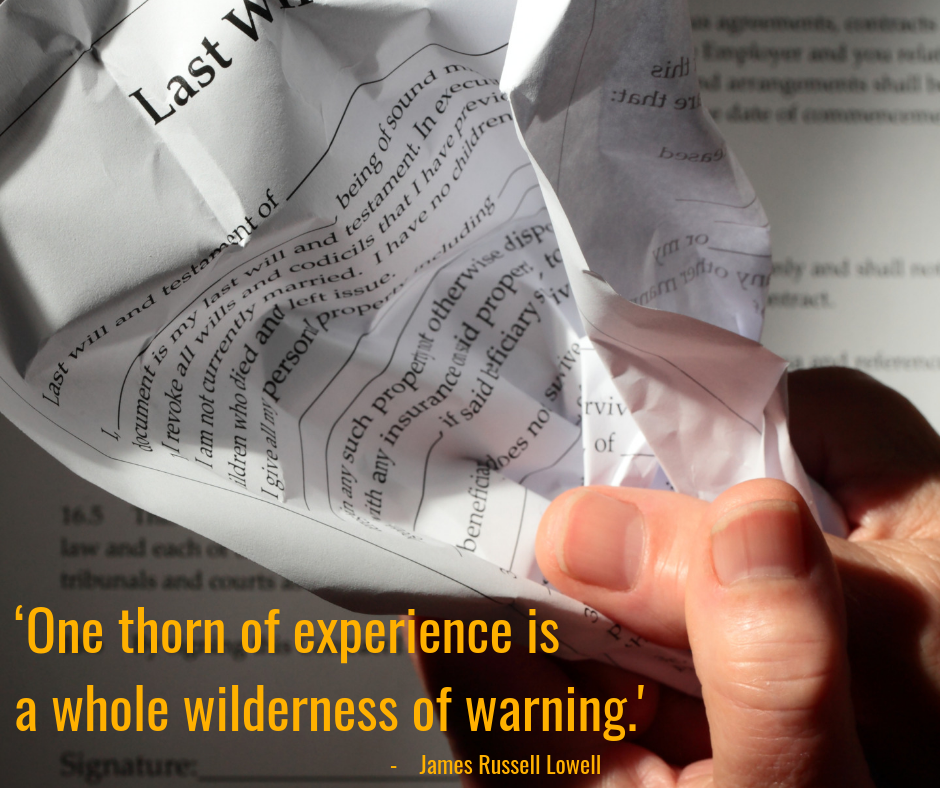 We often hear that “a stitch in time saves nine.” However, how does relate to succession planning?

In this context, I’m using the saying as a reminder that a timely effort and planning will save more work in the long run. More importantly, succession planning will protect and save familial relationships and avoid unnecessary expense.

In family disputes, make no mistake, the lawyers are always seen as the winners. The fact is there are only losers in contested and disputed estate rows. Contentious disputes tear families apart. I write today about avoiding contention when working through succession planning.

There are signs you can be aware of which indicate that contention may bubble under the surface after you pass on. The newspapers regularly cover stories where, by necessity, the court remedies challenged wills and inequities. The cases we read about have high value, so the potential outcome is worth the fight for one side or the other. For the ordinary family, the acrimony that arises is over smaller matters,  many of, which could have been foreseen by the person who passed away and passed on their assets. The administration of an estate is equal parts legal and personal. Disputes that arise rarely come out of the blue and they can often be anticipated and avoided through succession planning. Earl Nightingale once said ‘All you need is the plan, the roadmap and the courage to press on to your destination.’ In this article, I want to highlight what’s worth paying attention to when in the midst of your succession planning.

Inequity and economic disparity among beneficiaries

In the recent case, Estate of K deceased and in the matter of S117 of the Succession Act 1965 between K V K, where a mother sought to leave a 3 million euro value to one son, 42k to another and 750k to another, Mr Justice Denis McDonald remedied the inequity between the sons in light of the evidence he heard. He clearly stated that the deceased was, of course, entitled to make a more generous gift to the defendant than to the plaintiff taking the case for the inequity he suffered, but it seemed to the judge that the disparity between the gifts was extreme and that a prudent and just parent would not permit such a disparity to exist. In this case, it became clear to the judge that the mom was influenced by other factors where she preferred one son over the other for reasons, not of his making. The deceased had also changed her will two times and reduced what she was leaving to her son each time from what she and her husband had initially agreed. An incident that happened within the family had led to the demise of relationships between the deceased and her son, his wife and family and her decision to reduce what she left him appeared to be linked to the deterioration in the relationship and the outcome of a completely unrelated matter to her will and her wishes. The judge found in favour of the son who brought the case and cited the inequity and shared the value of the estate more equally based on the facts and what he saw a just and prudent parent would do. This is not an isolated case. The only difference here is the size of the estate which necessitated it going to court. The larger the estate often means the less chance of finding the middle ground to compromise.

No parent is obliged to leave their estate to their children. The standard the court uses is determined by what a just and prudent parent would want. The Succession Act makes it clear the only obligation the parent has to a child is a ‘moral one’, but there may be other considerations for you to take into account during the succession planning process. Have you advanced money previously to one or some children more than others? This money can be brought to light after your death to allege inequity if not considered in your will. Have you promised something to someone in return for their work or assistance that could be seen as a promise to be repaid in the future?

Making a will should a consultation with someone experienced, an objective expert in the area of succession planning, who can guide you to how the law might interpret your wishes and how an objective person may see the potential for contention.

Such consultation is also the opportunity I tell my clients to brainstorm their wishes and use the wisdom they have of their family and relationships to foresee any challenges their wishes might leave after they are gone.

Another small example of disparity may be when a property is being left between more than one person if the relationship between those beneficiaries is not a good one. In that case, my advice is to direct the executor to sell the property and share the proceeds as you wish between the beneficiaries, removing the burden on them to agree on what to do with the property. Some may want to hold the real estate, and some may prefer to have the value in money. Expecting properties to stay intact when it is left to more than one is short-sighted in many scenarios. Avoid conflict by leaving specific instructions as to the sale of the property.

A parents death is the ultimate test of any tensions brothers and sisters think they have overcome or outgrown. Grief can often trigger a reflection of days gone by and memories of bygone odds that were never evened up.

In my experience when the matriarch or patriarch is still alive, the relationships between siblings are managed in a way so as not to distress parents. As a parent, it is crucial for you to recognise the differences between children in personality, their wishes, and in the way, they are living their life. The administration of an estate can sometimes become the battleground for unsettled scores. Some treat this as an opportunity to stand by their wishes to settle a score and hold others to ransom decisions that impact everyone.

To avoid this, be clear in your succession planning and of your wishes. Please do not leave the executor in a position where they have to negotiate between parties as to what could or should happen. Be proactive and ensure you do make a will, discuss out loud your concerns for contention and be very specific with how you wish to leave the assets you know will be controversial. Taking contemporaneous notes is but one duty of a solicitor at the time of making a will. The notes that are taken and discussions had at the time of making your will are kept with your Will and are available in the case of a dispute arising to show your state of mind and intention at the time. Sometimes those notes will reflect the advice given and the choices made regardless of advice. Either way, give yourself the opportunity to talk your wishes out loud and consider the implications of some decisions with an objective person.

Section 62 of the Succession Act declares that the executor and personal representatives of an estate shall distribute the estate ‘as soon as it is reasonably practicable having regard to the nature of the estate ….’ The Act cites a year as an adequate time for the distribution of an estate.  The act does not allow for the payment of deceased debts to be deferred to the end of that year. There is an obligation to pay due debts with due diligence.

We have acted for beneficiaries who have to chase the executor to administer the estate where the executor is the primary beneficiary and in possession of the asset already so has little interest in taking up their role. Administering the estate may be necessary for a life policy, a bank account or in post savings account for the other beneficiaries named in the will. In that case, to avoid conflict, choose who is the best person to be the executor in the specific instance during your succession planning.

Unworthiness to Succeed or Disinheritance

The Succession Act 1965 confers a valuable right on a surviving spouse to inherit. This act enables children to get a just entitlement from a parents estate by making an application to the court. Those rights exist even in the absence of express provision for them by you. However there rare; circumstances where a spouse and a child fare debarred from taking any benefit from your estate because of their actions or behaviour during your lifetime. Section 120 of the Act sets out the grounds upon which a spouse or child shall be excluded from the succession. Some of the reasons that a court will stand by in excluding a spouse despite the entitlement to a legal right share are; Desertion – where a spouse has deserted you up to 2 years before your death.

Committing an offence where the person is found guilty of a crime against you whether it’s a spouse or the child. Another ground cited although the last recorded case was in 1959 in the act is ‘ restitution of conjugal rights ‘ where a spouse has failed to comply with a decree for restitution obtained by the deceased!

There are many reasons conflict arises but and do not underestimate the power of clarity, understanding succession rules and having a sounding board.  Call me on 6828383 to schedule a consultation.